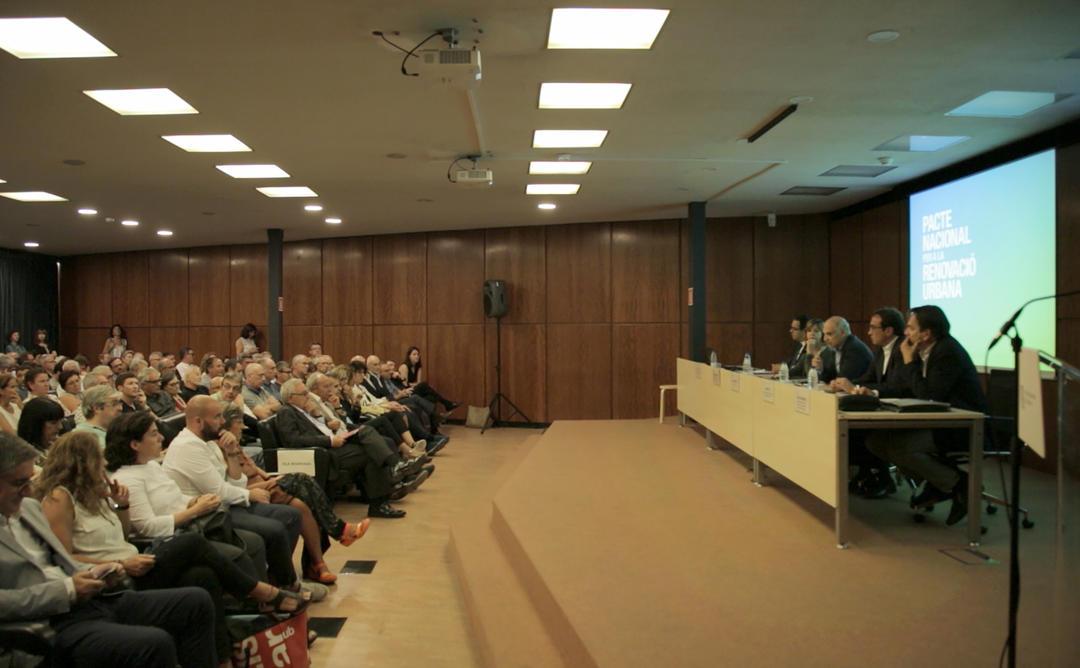 Imatge:
© Col·legi d'Arquitectes de Catalunya (COAC)
The Minister for Governance, Public Administrations and Housing, Meritxell Borràs; the Minister for Territory and Sustainability, Josep Rull; and the Dean of the Architects’ Association of Catalonia, Lluís Comerón, presented on 5 September at the COAC the launch of the future Catalan Agreement on Urban Renewal (PNRU).

Before an audience of over 200 people, Meritxell Borràs highlighted the fact that 'the ultimate goal of the Agreement is to improve everyone’s wellbeing and quality of life through sustainability and reducing inequality, with a horizontal model of governance'. To do so, the Minister contended that 'we will need to talk very openly about economic resources'. Meanwhile, Josep Rull emphasised that 'the Agreement must be created from the bottom up, like the Law on Architecture which was passed by Parliament with a significant consensus'. This Agreement represents 'urban planning from the point of view of sustainable development and an agenda of modernization'.

Lluís Comerón noted that 'many of the main challenges that are priorities in our society call for the holistic transformation and improvement of our cities'. According to the dean of the COAC, 'we need a new model for action which is the result of strategic planning that has the consensus of both the public administration and the sector. We architects bring on board our knowledge and our professional commitment to help make this possible'.

The Agreement, a COAC initiative with the backing of government consensus
The initiative behind the Agreement was a proposal that emerged during discussions at the Architecture Congress 2016 and was drawn up by the Governing Board to the Minister for Governance and the Minister for Territory and Sustainability.

In view of the sector’s situation, both ministries thought the Association’s proposal had merit, and the Secretariat for Housing and Urban Improvement and the Directorate-General for Spatial and Urban Planning have been involved during the last few months in setting in motion the structure of the Agreement. The Government’s commitment to urban renewal was further underlined with the passing of the Agreement.

The Architects’ Association has taken on the functions of secretariat, responsible for coordinating the Steering Group, the Strategic Council and the Agreement Committee (the governing bodies), setting up a documentary archive on the goals and lines of work of the Agreement, managing the experts involved, and specifying the measures for promoting the Agreement, as reflected in the government agreement.

A new model of urban renewal
The purpose of the Agreement is to help transform the economic, legal, normative and social framework to promote urban renewal and hence contribute to achieving goals such as improving people’s comfort and wellbeing, social cohesion, the prevention and correction of inequalities and vulnerabilities, energy transition and the reduction of CO2 emissions, the circular and collaborative economy, the introduction of new and better benefits, access to housing and the city, and the implementation of new technologies, amongst others.

This initiative is aligned with the UN’s Sustainable Development Goals (SDGs), the Paris Agreement, the Catalan Urban Agenda, and the initiatives being established by the European Union.