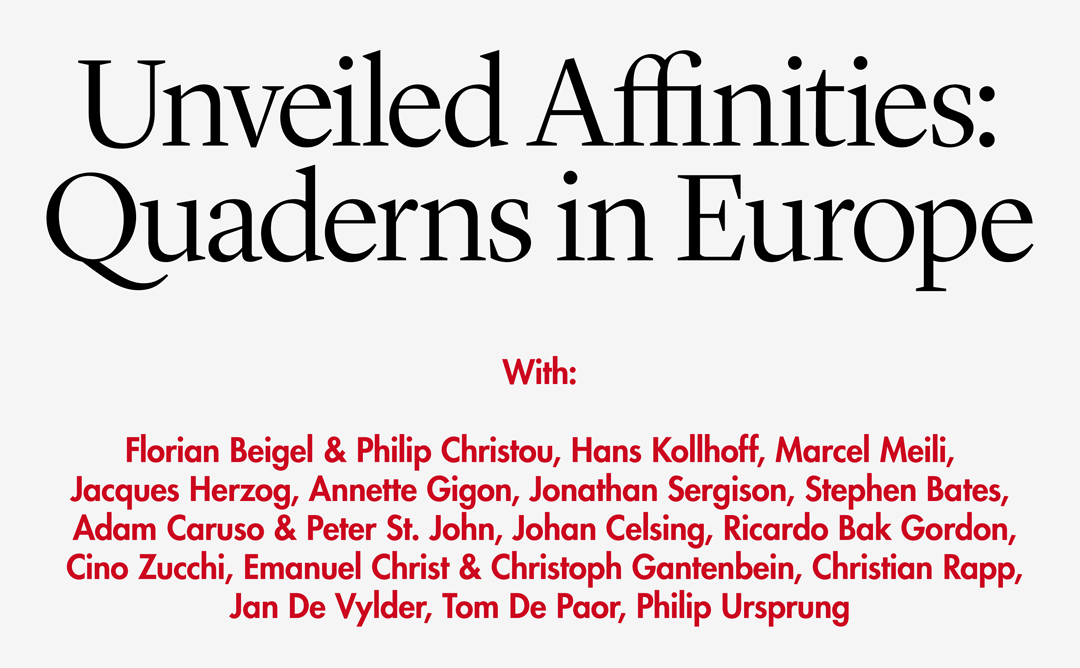 The exhibition ‘Unveiled Affinities: Quaderns in Europe’ opens February 15th at COAC. Its concept and curation is by the architects Pau Bajet, Pablo Garrido and Maria Giramé.

The exhibition ‘Unveiled Affinities: Quaderns in Europe’ unveils unrecorded ties between pages of the magazine Quaderns d’Arquitectura i Urbanisme from the 80s (period 1981-1991, issues 144-189) and current architectures of its former readers, some of them still students back then, today acknowledged architects from across Europe. The exhibition brings to light a cohort of witnesses, revealing unknown discursive continuities from those Quaderns edited in Barcelona decades ago.

The exhibition participants include Adam Caruso and Peter St John, Annette Gigon, Bak Gordon, Christian Rapp, Cino Zucchi, Emanuel Christ and Christoph Gantenbein, Florian Beigel and Philip Christou, Hans Kollhoff, Jacques Herzog, Jan de Vylder, Johan Celsing, Jonathan Sergison, Marcel Meili, Philip Ursprung, Stephen Bates and Tom de Paor. They participate with a threefold contribution: a selection of pages from Quaderns, a piece of their own architecture influenced or related to such pages and, through a brief interview, the story of such ties and memories. The exhibition starts with an interview to Josep Lluís Mateo, director of Quaderns in that period, and concludes with a brief epilogue by Eduard Bru.