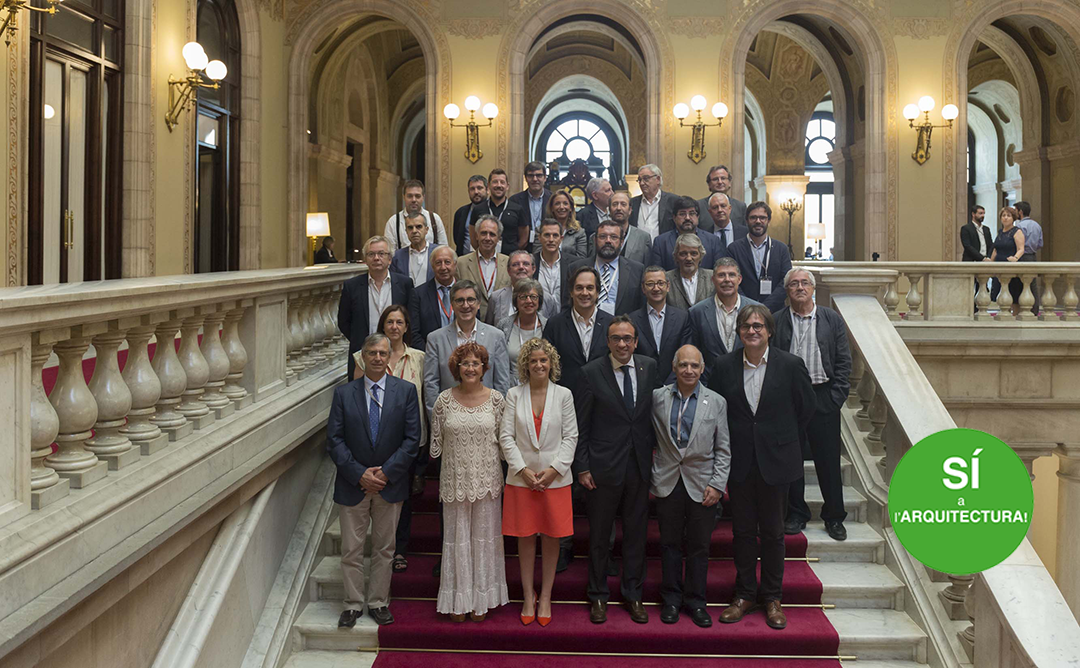 Four years working together to promote the social value of architecture

Imatge:
© Parlament de Catalunya
At the beginning of 2013, Santi Vila, the then Catalan Minister for Territory and Sustainability, warmly welcomed the Architects’ Association of Catalonia’s proposal of developing a Law on Architecture, along the lines of the similar law in France.

In May of the same year, the Association submitted a preliminary draft text of the Law, focusing on defining architecture as an asset of general public interest, establishing instruments for its dissemination and promotion and for governing public procurement with criteria of exemplariness.

The Minister then began the process moving forward with the proposal, constituting a joint promotion group between the Ministry and the Association to establish the basis of the future text. The group drew up an initial draft, on whose basis the Government of Catalonia was to approve the wording of the future law.

The commencement of processing of the bill
On 3 December 2013, the Executive Council of the Government of Catalonia approved the Law’s preliminary report. This marked the start of the parliamentary processing of the draft bill of the Law on Architecture.

To do this, a drafting team was constituted, involving the participation of members of the Ministry of Territory and Sustainability, the Architects’ Association of Catalonia (COAC), the Barcelona School of Architecture (ETSAB), Arquitectes per l'Arquitectura (AxA), the Federation of Municipalities of Catalonia and the Catalan Association of Municipalities. In March 2014, the processing of the draft bill commenced.

After a year of hard work, in August, the Executive Council of the Government of Catalonia approved the draft bill of the Catalan Law on Architecture. All that remained, then, was for the future law to be debated in Parliament. Nevertheless, the calling of elections for Catalonia prevented its immediate processing in Parliament.

Government ratification and the start of parliamentary processing
In March 2016, after the formation of the new Executive, Josep Rull, the new Minister for Territory and Sustainability, picked up the baton and returned to the task of promoting the Law, now with the goal of ensuring the greatest possible consensus. With this in mind, the Government of Catalonia ratified the draft bill, once again opening up the way for the parliamentary processing of what was now a formal bill, which was given leave to proceed on 22 March.

Parliamentary debate
On 19 October 2016, the plenary session of the Parliament of Catalonia debated the entire bill. Having completed this initial step, the bill continued its way through Parliament, moving on to being dealt with by the Territory Committee, which had to debate its content.

This marked the start of a period of appearances before Parliament by the different organisations and associations, who explained their viewpoints on the content of the bill. The 15th of February 2017 saw the first of these appearances, which included, amongst others, those of La Col Architects’ Cooperative, Arquitectes per l'Arquitectura (AxA), the Architecture and Sustainability Group of the Architects’ Association (AUS), the Urban Architects’ Group of the Architects’ Association (AAUC), the Council of Schools of Architecture of Catalonia, the Federation of Municipalities of Catalonia and the Catalan Association of Municipalities. All of them gave the Law their support. The appearances concluded on 1 March with that of the Association’s dean, Lluís Comerón, who explained the reasons for and aims and advantages of the Law for an hour.

After including the amendments proposed by parliamentary groups, the bill returned to the Parliament’s plenary session for its final debate and vote, which took place on 28 June. The Law on Architecture was passed with broad consensus: 98 votes in favour, 9 against and 25 abstentions.

A collaborative process: many thanks to all involved!
It has been four years of hard work led by the Catalan Ministry of Territory and Sustainability, which has at all times enjoyed the support and close collaboration of the COAC.

We would like to express our thanks for the backing we have received from AxA, Arquinfad, Catalonia’s schools of architecture, Barcelona City Council, the Higher Council of Architects’ Associations of Spain (CSCAE), the Barcelona Association of Quantity Surveyors, Technical Architects and Building Engineers (CAATEEB) and the other professional institutes and organisations involved, not to mention the other institutions, organisations and individuals who helped make this great collective project possible.

We have all worked towards a common goal: that of ensuring the best possible legal framework for reinvigorating architecture’s value to society, building a better future for our cities and establishing a proper professional framework for our colleagues.